Visiting our Museum : If you are visiting the Black Diamond District Heritage Centre Museum at Bulli Railway Station East, and are interested in Woonona connections, please ask to view our Woonona folder. It was an initiative of the August 2018 National Family History Month. The Woonona folder holds a range of information and photographs of the Woonona area. Just ask one of our Museum Volunteers to show you the folder. 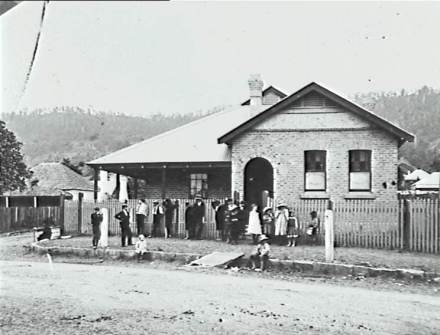 In 2018, we had decided that the Museum would feature an exhibition on Woonona, in conjunction with our Blinkco Family Collection items not usually exhibited. In preparing for the exhibition, and in conjunction with long time Museum volunteer and Woonona resident, Graeme Stewart, it became apparent that there was not a single book covering a comprehensive history of Woonona. I’d found the same hurdles, in researching my own McKenzie’s family in Woonona – when Alexander McKenzie acquired about 300 acres from the Robert and John Campbell Land Grants, part of the original Bellambi Estate, up around Nicholson Lane past Gray St and extending east and west of the Main Road in 1854. It seems that it was in this area, around Gray Street,  that Henry Fry established his first store, near where Downie’s set up their Blacksmiths operation, where the Denominational School and the School of Arts were located – and where Woonona’s village  began to grow from 1858, a consequence of Thomas Hale’s entrepreneurial coal mining activities. Later, the village moved further northwards, mostly centred between Nicholson Road and Hopetoun Street. 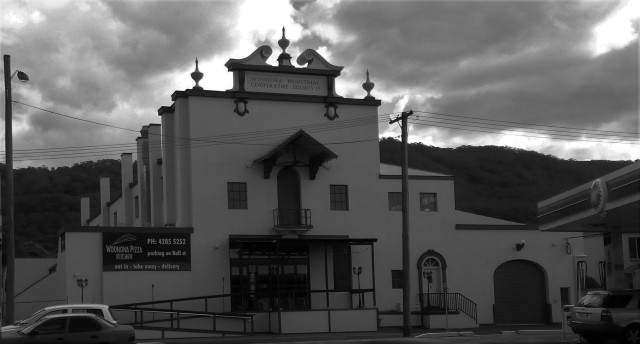 Nevertheless aspects of Woonona’s history can be found on-line  and in a large number of local & family history books (see bibliography at bottom of page).

In consequence of the absence of a single text on Woonona’s history, this page is an attempt to initially seek to identify and weave together these various strands of Woonona’s history. Please note if there is already information available elsewhere, we will not reproduce it here – but instead link or point to where the information can be located.

We have also registered Woonona – Bellambi-Russell Vale on the Directory  of One Place Studies, as has been done with Sherbrooke, the Lost Village on Bulli Mountain.

Note – a number of Sherbrooke families came to Woonona, after their properties were resumed for Cataract Dam from 1902.

Woonona before European contact had long been a place of the Dharawal people for thousands of years. European contact began in 1770 when James Cook unsuccessfully attempted to land in Woonona (though some claimed it was Bulli) during adverse weather conditions. But back then the whole area was called Bulli.

There are mentions of Woonona in newspapers from the 1850’s at least – though with varied spellings : Woonona, Woonoona, Wonona.

European connections with the area around Woonona  probably date from about 1797, when shipwrecked sailors passed through the area, followed by Charles Throsby in 1815, and then cedar getters. Often Woonona was lumped in with Bulli, though Woonona has increasingly overshadowed Bulli.

WA Bayley wrote in his epic “Black Diamonds“, that the houses owned by Peggy McGawley and the Geraghty brothers, had been built by 1828, between Woonona and Bellambi of today. Though, back then, the houses were described as being in Bulli.

There were land grants sought in 1820’s – 1840’s –  Harriet Overington Spearing nee Harwood was promised one of the larger holdings in the area –  the 1920  acres of the Bellambi Estate in 1827. In 1835, James & Harriet Spearing sold the Bellambi Estate to Lieutenant Colonel John Thomas Leahy and the Spearing’s left the Illawarra for Sydney.

In 1836,  there were some land sales of lots in the Bellambi Estate. About 1839, Lieutenant Colonel John Thomas Leahy died inestate and unmarried, his heir at law being his brother Daniel in Ireland.  Robert and Charles Campbell, Sydney Merchants – 1, 2,  were appointed as attorneys for Daniel – and it was to them he conveyed the Bellambi Estate Land. In 1841, Robert and Charles Campbell of George St Sydney were issued the Bellambi Estate grant, and by the 1850’s, more of the lots in the Grant began to be more significantly sold off.

In 1871 it was written of Woonona – ” a small postal village is reached. It has a Wesleyan and Presbyterian Church, a good store and post office, Mr. H . Fry; a public house, Mr. Edwards; a School of Arts, which Is a large wooden building; and last. though not least, a certified denominational school with an attendance of fifty-six pupils under the charge of Mr. B. F  Levey. The chlldren were tolerably clean, and good discipline was maintained. The proficiency on the whole was very fair, and the headmaster who has only been a few months in charge, is generally acknowledged as a most painstaking teacher. There is in Woonona a benefit society – an excellent Institution in a flourishing state; Mr. H. Fry is president. “

In 1889, a local correspondent was much more effusive :

Woonona – 9.4.1889 Illawarra Mercury
The ‘old Hands’ about Woonona are now proudly appealing to their neighbors in Bulli as to whether their old prophesies are not being gloriously fulfilled. They tell us to look  around from Collings’ Hill, where Woonona commences and Bulli ends, and say whether Woonona, one of the oldest postal towns in the colony, is not again to the fore. Houses of all kinds are going up in all directions. Two stores have just been opened, and two more are on the way. Mr. Ball, of the Steam Cordial Factory, talks of building a much-wanted coffee palace at the corner of his triangular allotment on the Campbell Estate. One public-house is quite enough for Woonona, and that at the other end of it. The place is
full of temperance people at the other end, who successfully blocked an application for a pub. six years ago. The Bellambi Hotel, now carried on by Mr. Wilson, sen. (who has retired from the management of the South Bulli and Bellambi Colliery), is just at a ‘ respectable,’ though not quite satisfactory, distance from the homes of the present and future citizens of ‘Beautiful Woonona.’ The Woonona and Bellambi School of Arts, we
hope, will soon bo opened, at the wish of a great number of tho reading peoplo of the district, the majority of whom live at Woonona. We want, and shall have, a railway platform at Woonona, near the late Mrs. Salter’s property, as soon as Hale’s Estate shall have become the property of the good people of Woonona and the aristocratic quarter in the village. Now as to a superior Public-school. We are in hopes that when the Public-schools at Woonona and Bulli shall have afforded nourishment for a year or two more to the ubiquitous white-ants, a school of this kind will be built in the neighborhood of the Woonona platform, or near ‘The Vatican.’ . . . . Tho Wesleyan minister is going to live amongst us at least for a little while, and we have the benefit of Presbyterian and Church of England places of worship. We are a little concerned at this moment about Mr. H. Osborne’s notice to quit to tenants settled on lands formerly belonging to the late Mr. Hale. It is generally thought that it is wanted for Woonona Coal Company purposes. We have on the border-line, near Bulli, a house for our new doctor-Dr. Nagel, the assistant of
the prosperous, genial and complaisant medico, Dr Lee The next thing we must seek is a lawyer as there are some hundreds of acres to be conveyed and a score or two of people ready to quarrel. We have a good many bush-lawyers, who think themselves equal to the legal fraternity of Wollongong. The Literary Debating’ Society may, perhaps, turn out a few Martins or Dalleys before our need is very urgent. As for a resident policeman, the honor has long been withdrawn. Our late constable (Trevallian) once lived in Woonona, but moved to Bulli over a year ago. His successor (Constable Duke) lives in the same place. Woonona possesses the Registrar of Births, Deaths, and Marriages— who is also an amiable representative inthe “Light Horse’ contingent. Again, the majority of the men of No 7 Battery, V.A., reside amid this favored community—and when a great post-office has to be erected for Bulli and surrounding villages common opinion points to a site on Collings’ Hill as just the centre from which may issue forth day by day, letter-carriers gathering in letters &c., from the boxes, and delivering others in every quarter. ‘

Map of Parish of Wonona in the County of Camden – note extends beyond what was the Private Village of Wonona.

How Woonona Grew : Housing & Real Estate – once described as a Private Village.

Below are some of the early subdivisions for town lots in Woonona in the 19th Century – click here to see more.

The Woonona folder in the Black Diamond District Heritage Centre, an initiative of the August 2018 National Family History Month,  holds family trees for a number of these families. Though still relatively small in number in 2018, it will be expected to grow over time.

There are notes for some Woonona families available on-line :

Electoral rolls from the 1850’s, 1870’s, 1903 and 1913, Greville’s 1872 Postal Directory,  the Census of 1891 & 1901, as well as nominal rolls for WW1 and WW2 all provide an indication of many of the Early Woonona Family Names, plus how Woonona grew from the late 19th Century to the mid 20th Century. In earlier days especially, Woonona had strong connections with Sherbrooke on Bulli Mountain, and Bulli itself.

It’s no surprise to find some families of the Woonona district with convict connections: –

And of course, there’s long been families with strong Scottish Protestant or  Irish Catholic heritage in Woonona’s old European families – but did you know there’s also some elements of Huguenot French Protestant connections too  – eg in the connections of the Collings (viz de la Penotiere) and Green (via Avard) families.

Earliest regular access was via the Sea – and later jetties were established for coal transport in the northern Illawarra, including at Bellambi. Tramways, with coal wagons initially being horse-drawn and later by steam trains, connected the collieries to the jetties.

1847-48 saw Benjamin Rixon, a mail contractor, developing Rixon’s Pass, a road still in existence in part at the southern end of Woonona. In the years 1863 – 1868, Westmacott’s Pass came to being, developed by another mail contractor George Organ, and then as the Bulli Mountain Road developed by Andrew Turnbull by 1867 – 1868.

1887 finally saw the first trains in the Woonona area, and in 1888 it was finally possible to travel all the way by train from Wollongong to Sydney. Prior to the trains starting on the south coast, people travelled by coach across rough roads, either up to Appin or into the south of Sydney to connect with the trains to the heart of Sydney.

Bibliography – Woonona on-line and in Print

Woonona is covered by a range of on-line historical resources, including :

Woonona is also covered by a range of print historical resources, including :